By Heather Melcer.
It doesn’t take much to make Feng Shui shifts of energy within your home or office. In fact it’s quite simple and sometimes the smallest changes in your environment can really create shifts in your life, both little and big. I have met many people over the years who insist that there is nothing they can do in their home for a solution to some kind of energy block, but I am here to say over and over again, there is always a little Feng Shui you can do that can go a really long way. Here are two great examples…
A client of mine moved into a new apartment and emailed me a photo of her wealth corner (which is the back left corner of your home or room). Having been to her place before I could tell this new place is very light, crisp and airy, the energy simply feels better, a vast improvement from her prior home and this area looked very quaint. HOWEVER, the first thing I also simultaneously noticed was the downward growing ivy plant right smack in the very area I knew she was trying to uplift!
So I politely pointed this out, and reminded her that the wealth corner should be flourishing and uplifting. She explained that the sun in her new space, while wonderful to have so much light, hits so hard that nothing will grow there and anything fades, so she said she would have to think about it and get creative. And so she did! Swapping out the downward plant for a small bouquet of silk flowers, and the photo for a purple candle (purple is the color for the wealth area), well, let’s just say the report I got one week later was how money improved that week, and another week after that, about all the new private clients she booked for her business!

And then coincidentally just the other day, literally as I was drafting up this blog post I received an email titled….

“Just wanted to update you – I’ve been feeling a lot better since our meeting the other day, both physically and spiritually, and yesterday I had a lot of energy so I ran around and did a bunch of chores.  One was to get that thermometer outdoor artwork that I have been drawn to for the prosperity area (outside my back stairs wall/outside bedroom wall).  I found a very nice one at Lowe’s for only $20 that I like a lot, and it was much less than the others I was finding online, so I was very happy.  I put it up, said a little prayer, put out the intent for prosperity to flow in my life, etc.
Then today the cable guy came only to discover that since I don’t have an actual TV and it’s just a monitor the service they were going to hook up wasn’t possible.  It can’t be done with just a monitor, so he called and cancelled the service.  However, we started talking and I told him that I was thinking of trying to hook up my Logitech Google TV system that I got as a promo (free) and also trying to hook up a backup cloud for both the mac and pc but needed another router.  He not only gave me a router and helped set it up, he went out to his truck and got an adapter cable for the Logitech box and just gave it to me.  I asked if I would need to return it and he said no – I could just keep it.  I know for a fact those things are about $60.  So I got service, a new router and an adapter for free. YAY!”
This is a good example of how important it is in Feng Shui to pay attention and notice when you make small changes in your home or office, of how it’s working, how the energy of that space is connected to your life and how things begin to flow.

So at those moments when you feel like there is no other way to position the furniture, or there isn’t any money to do what you’d like to do, or you simply get to that throw your hands in the air point of frustration when life seems to be in chaos, don’t worry so much about the big things, break it down, as there are always little things you can do to infuse bit of Feng Shui into your space for little changes that grow into big ones along the way.

If you liked enjoyed this post with the before and afters, be sure to “Like” my FB page, with before and after photo albums and more on the way… https://www.Facebook.com/HarmonyInMotion

For more detailed info about the Bagua Map, check out my eGuide… 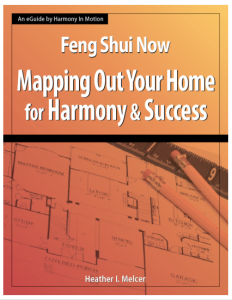 Welcome to my Feng Shui Tips blog. Here you will find resources, tips and guidance to incorporate the wonderful principles of Feng Shui into your home and life. For information about consultation services please view my main website at: HarmonyInMotion.com

Posts may NOT be published elsewhere without written permission from the author. However, direct link, pings and trackbacks are always welcome with gratitude.